Hello readers in this discussion we have sum up the NCERT class 6 Geography Chapter 7 named as ‘Our Country – India’. Please read thoroughly to know all the basic details of India.

In terms of geographical expanse India is a vast country. It has the lofty Himalayas in the north, the Arabian Sea in the west, the Bay of Bengal in the east and the Indian ocean in the south. India has its total geographical area of 3.28 million square km and is the 7th largest country in the world in terms of area. The biggest country I terms of area is Russia.

India is 3200 km from north to south i.e. from Kashmir to Kanyakumari and 2900 km vast from east to west that is Arunachal Pradesh to Kuchchh (Gujrat). The north south extent of India lies between – 80 4’ N to 37o6’ N latitude and the east west between 68o7’ E to 37o6’ E longitudes. Because of its great east west expanse of 29 longitudes the time different between Arunachal Pradesh and Gujarat is about 2 hours i.e. the sun rises 2 hour earlier in Arunachal Pradesh. We have already discussed about the IST and Indian Standard meridian in chapter 2 if you have any doubts on it please refer to this article –

India has 7 neighbor which share the land boundary with India. These are following –

We have two island neighbor across the sea in south which are Sri Lanka and Maldives. Sri Lanka is separated from India with a narrow water named as the Pulk Strait.

India is divided into 29 states and 7 union territories to make easy administration. Telangana is the newest state which was formed on 2 June 2014, separated from Andhra Pradesh. Because Hyderabad comes in Telangana Amravati will be the next capital of Andhra Pradesh. New Delhi is the National Capital and also a union territory. Rajasthan is the biggest state and Goa is the smallest state in India in terms of area. 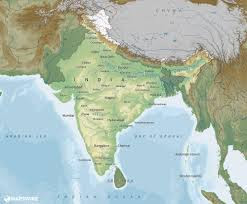 The Northern Plains are to the south of the Himalayas. These are flat plain and formed by the alluvial deposits comes as the load of river Ganga and Brahmaputra. These rivers together form the world largest delta. Alluvial deposits are very fine soils which brought by rivers.

We have eastern Ghats in the East of Peninsular plateau and Western Ghats to the west of it and at coasts lies the Coastal plains. Two island groups are also part of India which are Lakshadweep and Andaman and the Nicobar Islands.

The rivers Mahanadi, Godavari, Krishna and Cauvery are the main river of southern India and drains into Bay of Bengal.

Thank You! I hope you liked this summary of NCERT class 6 geography book Chapter 7 named as ‘Our country India’. If have any doubts please, feel free to comment below.