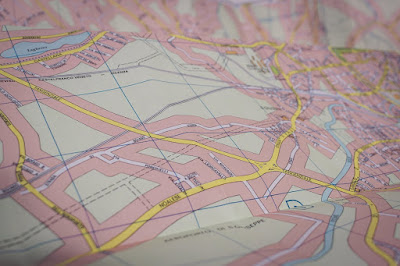 We already read about the Globe and what we can see on a globe. Basically on globe we have the representation of continents and oceans at a large scale and we can’t observe information from globe at small scale. So we need map to get our navigation at small scale like counties, states, districts, towns and villages.

A map is a representation or drawing of the earth’s surface or a small part of earth’s surface drawn on a flat surface in a right scale. But in reality it is impossible to flatten a round shape completely. We use map for completely different purposes – some map is used for small areas and a few facts, some maps may contain many facts like a big book. Book which contains many type of map from small scale to large scale, from few facts to many facts is called Atlas.

Physical Maps – these are the maps which shows the features of the earth like mountains, plains, plateau, oceans, river, deltas, trenches etc. Physical maps are also known as relief maps.

Political Maps – these are the maps which shows the political boundaries of different countries, shows cities, towns, villages, state with their boundaries.

Thematic Maps – these are the maps which focuses on specific information like roads, rainfalls, forests, industries, natural resources etc.

Distance is the most difficult component of maps to represent on a flatten surface w.r.t. the real ground. If we take actual distance in maps than we would not be able to make a map for even a small village because making a map in real scale is not possible. Though we reduce the distance between place to represent it on maps. We choose a scale to get the actual map in our paper. Scale is the ration between the actual distance and the distance shown on the map.

When we show large areas like countries and continent on paper than we use small scale like 5 cm for 500 km of distance but when a small area like villages, has to be drawn on a paper we take large scale that is 5 cm for 500 meters.

All the maps contain an arrow directing in upper side and marked as N or North, it is called as North Line. The four major we use in maps are North, South, East and West and called as cardinal points. We also have four intermediate directions which are North-east, South-east, South-west and North-west.

This is the third important component of map. We can’t show features and places on maps in actual shapes. To overcome this problem, we use symbols of every feature and places to show the perfect map in right manner. This symbol gives us lot of information in a limited space and makes the map easy to read. Symbols used in maps can’t be different in any region. There are conventional symbols used by everyone which are decides with an international agreement. You can see some examples of symbols of maps here.

DIFFERENCE BETWEEN SKETCH AND PLAN

A sketch is a drawing based on memory and observations without considering any scale rather a Plan is a drawing of a small area on a large scale which gives a lot of information.

Thank You! I hope you like this summary of Maps class 6 cbse Geography Chapter 4 “Maps”. If you still have any doubt in your mind, please feel free to comment below.